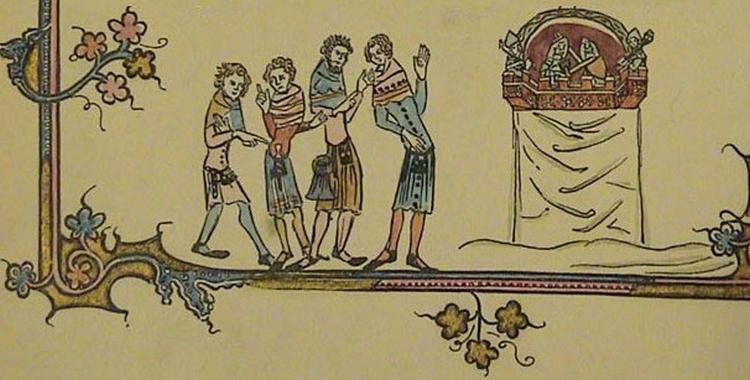 Did you know that a man-eating dragon once visited Durham City? Or that the oldest work of drama in Britain may have been written in the North East? Or that Lord Neville of Raby claimed the right to enter Durham cathedral once a year and make an offering of a recently killed stag on the altar in Durham Cathedral?

The North East region is rich in a history of now forgotten folk traditions, performances, plays and rituals. These were explored in an exhibition on Plays, Processions and Parchment which ran in Durham Cathedral in May 2016. Podcasts from the series of talks that accompanied the exhibition are below.

Worms, stags, and other folk performances, by Professor John McKinnell

Folk performances and ceremonies make up one of the most interesting categories of early dramatic activity, although the low social status and illiteracy of most of their performers means that they are rarely recorded; however, late medieval records from the North-East are particularly rich in references to them. Some reflect popular legends and beliefs about dangerous animals, while others, such as bringing in the plough on the day after Epiphany or the competitive May games, mark particular turning points of the year. Professor John McKinnell outlines some of the evidence for popular ceremonies and entertainments in the North-East region and makes some suggestions of what they were really ‘about’.

Picture medieval Durham one day in the late spring. Plays are performed in the city from dawn until dusk. An elaborate procession moves from the marketplace to the Cathedral, bearing a shrine. A special service is celebrated. Dr Mark Chambers resurrects a special tradition in Durham’s religious calendar.

Each year, the Cathedral celebrates the feast of Corpus Christi. This feast, celebrating the ‘Body of Christ’ represented by the bread and wine of the sacrament of Communion, has been a highlight of the Christian calendar for nearly 700 years, and is still the premier feast day following the celebration of Easter.

As well as tracing the history of the Corpus Christi plays before the reformation and highlighting evidence for them, Mark Chambers also investigates theories as to what plays were played, by whom, and how.

A Funny Kind of Devotion? Laughter in the Biblical Drama of Late Medieval Towns and Cities, by Jamie Beckett

When people think of medieval Christianity they often summon up visions of mumbling monks and self-flagellating martyrs, opulence and grandeur paired up with austerity and strict morality. But where was the laughter? Where were the jokes? (And were they funny?)

Jamie Beckett looks at some intriguing evidence of popular drama from towns and cities in the North East. He shows that humour and laughter was alive and well during the medieval period, and gives us a glimpse of a robust performance culture where humour and laughter could be entirely bound up with devotion.