With films like The Life Aquatic, Amélie, and the recent Grand Budapest Hotel, the directors Wes Anderson and Jean-Pierre Jeunet are known for the slightly weird, sometimes unsettling twists that they give to reality. Using colour filters, child-like musical scores, and shots that make locations look like models, both directors evoke fairy-tale like worlds in which their characters can seem like dolls. Elizabeth Drialo shows how their films draw on the disturbing quality of the uncanny to ultimately produce a sense of nostalgia in the audience.

“In my work with Charles Dickens, I have found myself studying and often writing on the uncanny: its definition, its use, and how we react to something unfamiliar that is found within the familiar. The uncanny is often associated with something uncomfortable – sometimes frightening, other times unsettling such as Dickens’ monstrous character Quilp in the Old Curiosity Shop or Little Dorrit’s disproportioned Maggy. But in this lecture, I want to look at another side of the uncanny that has become a niche in contemporary cinema: the ‘comfortable uncanny.’ While seemingly an oxymoron, the ‘comfortable uncanny’ is presented in the colors, stories, music, and actors of both Wes Anderson’s and Jean-Pierre Jeunet’s films. Concentrating on Anderson’s most recent film The Grand Budapest Hotel (2014) and Jeunet’s Oscar nominated film Amélie (2001), I will explore how both filmmakers create a world where the uncanny is charming, entertaining, and, rather than be uncomfortable, finds a balance between the familiar and unfamiliar. I will also show how, when the charm of the comfortable uncanny is subverted in both films, the impact is startling and sometimes even upsetting, but becomes a powerful and effective film technique. Thus, the uncanny finds new meaning in these films and new questions can be posed: what happens when the uncanny is surpassed? Subverted? How and why do we react? Can there really be comfort in something that is uncanny? Drawing on these two brilliant films and mentions of others from both filmmakers’ canons, I hope to in this lecture provoke new thoughts and discussions on the uncanny and our reception of it in today’s – and perhaps even the past’s – popular culture.”

Before listening to this podcast, you might wish to view two trailers, which Elizabeth refers to in her talk. 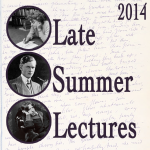 From the uncanny films of Wes Anderson and Jean-Pierre Jeunet, to the flimflamming con artists of Oscar Wilde, Late Summer Lectures covers an eclectic and fascinating mix of topics. The series runs at 7.00 on Wednesday evenings from 13th August to 1st October, in Alington House, Durham.