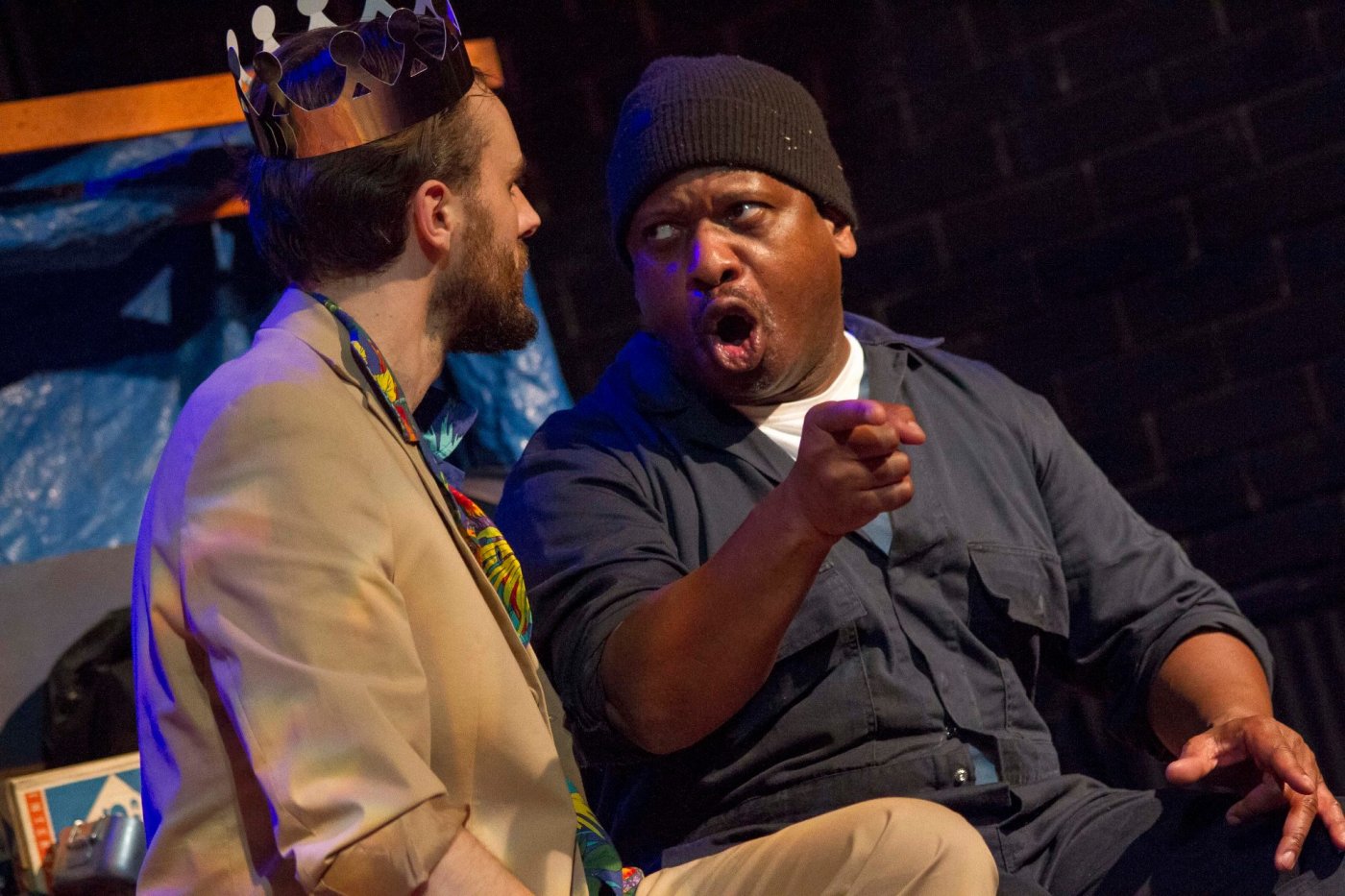 Coming to the North of England for the very first time, Playland, by South African dramatist Athol Fugard, presents a view of Apartheid, race, and reconciliation that Elysium Theatre Company have transformed into an immersive, poignant, and powerful production. Kate Foy reviews.

From the moment the doors open, Elysium’s production of Athol Fugard’s Playland powerfully presents the dissonant co-existence that defined Apartheid-era South Africa in 1989. An auditory backdrop of Radio news tunes in and out; its message that ‘things are changing in South Africa’ accompanies the footsteps of troops marching. That it does so to Frankie Goes to Hollywood’s ‘Two Tribes’ is striking. As the audience enters, Danny Solomon’s Gideon Le Roux and Faz Singhateh’s Martinus Zoeloe sit at opposite ends of the front row, framing the audience’s first sight of the set. Their symbolic distance reflects their racial segregation.

Throughout, there is a sense of the dangerous imbalance of power between the characters. Gideon Le Roux demands an attention and respect from Martinus Zoeloe that he fails to earn, simmering on the edge of violence throughout. The play is set at the edges of the travelling funfair, Playland, where Martinus works as watchman and handyman. The play opens with Gideon waiting impatiently for the fun of the fair to start, on this symbolic New Year’s Eve night. Martinus’ opening lines are addressed to an unseen audience, admonishing them for their sinful ways: ‘He knows. He sees everything you do’. In the intimate setting of Durham’s City Theatre, the audience cannot help but be gripped from the outset. Fugard’s anti-Apartheid  message is symbolically encoded in both characters’ fascinated absorption in the sunset: ‘It’s started’, ‘tonight I see the fires of eternal damnation’. By the end of the play, both characters have shared their relationship with Hell: Gideon’s guilt-ridden PTSD and Martinus’ stoic acceptance of damnation for his inability to feel guilt at all.

When Playland bursts into life, the contrast between the characters is marked. Solomon’s Le Roux is all mobility: restlessly smoking and drinking are tangible measures by which he charts the passage of time. Singhateh’s Zoeloe, by contrast, is stasis: controlled and patient as he reads his Bible. Martinus’ instruction to Gideon reflects their differing positions: ‘pretty lights and music. Go forget your troubles, white man. Playland is waiting for you’. Gideon’s unwanted and repeated return to Martinus’ watchman post is met with increasing discomfort. Singhateh’s clenching jaw and shifting eyes subtly evidence his character’s concerns: ‘watching the night and waiting for trouble’. As midnight arrives, Solomon’s depiction of Gideon’s loss of control is convincing. When a rendition of Auld Lang Syne shifts into a aerial combat soundscape he crouches, haunted, pushing at his temples and gulping at air under red lighting. Gideon’s self-talk reassurance, easy kid, you’re alive’, fails to compensate for the flashback reaction to the firework celebration.

Martinus’ observation that ‘you come back again and again’ cuts into the restlessness of Gideon; Fugard suggests that connection and  understanding is complex and hard to achieve. The question that both characters finally come to is perhaps Fugard’s central message. In order for true human connection, each must ask another: ‘do you understand me?’ A powerful, immersive and poignant production: excellent theatre!

Elysium Theatre Company’s Playland is touring the North, with further shows in Empty Space Theatre, Manchester on 31st October to 2nd November, and Hullabaloo Space, Darlington, on 3rd November. For background to the show, read our two-part interview with director, Jake Murray.

2 thoughts on “‘Tonight I see the fires of eternal damnation’: Review of Athol Fugard’s Playland, produced by Elysium Theatre Company”