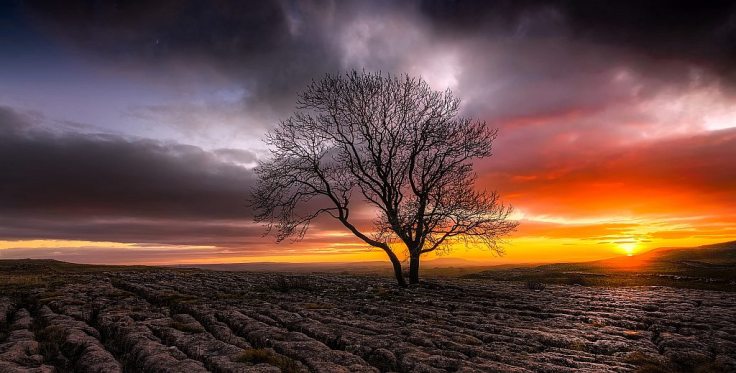 In a world threatened by nuclear weapons and climate change, is there any hope left? In this Late Summer Lecture, David Cross-Kane and Sarah Lohmann will show how science fiction has been both pessimistic and optimistic about the future to come. Join the debate at 17.30 on 27th September in Alington House, Durham.

‘After The End: Post-Human Discourse in the Late-Anthropocene, or Tentacles of Past, Present & Future,’ by David Cross-Kane

In the hyperstitional model…fiction is not opposed to the real. Rather, reality is understood to be composed of fictions – consistent semiotic terrains that condition perceptual, affective, and behavioural responses. – CCRU, 1997-2003

Art and literature, most notably in the genre of Science fiction, has long depicted the Late-Anthropocene, yet, we have only recently entered the Anthropocene; an epoch determined by humanity’s influence on the Earth’s ecosystems and geology. This is the “era of saturation,” simulation, hyperobjects and cybernetic enterprise. Manifestos linger yet seem obsolete, whilst humans gather a sense of their own rapid decline humanity accelerates towards the end. Not the end of the world, mind, just the end of us (humans). What comes after the end of humanity? What is the post-human and who are ‘They’, if there is indeed a ‘They’ to be had? Kurt Vonnegut’s Galapagos depicts the post-human form as seal-like creatures directly descended from a survivor of the Hiroshima bomb. Michele Houellebecq envelops his late-capitalist narrative, Atomised, through the voice of a new species manufactured and evolved through cloning who deem the human experience inferior to their own.

Both these narratives are haunted; the absence of the human is visible in the presence of a past-human. The human body is increasingly displaced inside and outside the world, a world post- modernity, in which a We/They relationship becomes deterritorialized and reterritorialized within the Xenosystems of the everyday. The term Xenosystem here denotes that which is systematic is also alien, an unknown system, it is the outside come inside. Late-capitalism may be one such Xenosystem, the tentacular presence of an (un)earthly horror stretching deep into our recent past, extending from the now and into the ‘what will be’. Via a reading of postmodern SF narratives, and taking into account Jameson, we can ask if the engineering of a post-apocalypse and post-human imaginary goes someway to acknowledging the impact of humanity and late-capitalism has had on the future of both the human species and the planet Earth. After all, as Mark Fisher rescripts Jameson and Žižek we recount, “it is easier to imagine the end of the world than the end of capitalism.” – what then comes after the end?

‘The Coming Races: Society, the Individual and the Evolution of Utopia in the 20th Century and Today,’ by Sarah Lohmann

Utopian literature has historically presented itself as at the service of the community, showcasing a better life for all. However, in several utopian texts from the genre’s ‘golden age’, around the turn of the last century, an interesting tendency can be found that is somewhat at odds with this stated aim. In novels such as Edward Bulwer-Lytton’s The Coming Race, William Henry Hudson’s A Crystal Age, Edward Bellamy’s Looking Backward and William Morris’s News from Nowhere, there seems to be a curious reliance on some sort of ‘natural eugenics’ that has produced humans evolved to a much higher standard. Though not always made clear, the physical and social effects speak for themselves – whether in the frightening efficiency of Looking Backwards’ ‘industrial army’, the sphinx-like elegance of The Coming Race’s Vril-ya, or the innocent beauty of Hudson and Morris’s pastoral utopians. In my talk, I will argue that this unsettling eugenicism can in fact be seen as undermining the very thing that could possibly make a literary utopia successful – the collective evolution that its societal transformation offers, rather than that of individuals. In fact, I will argue that this fact can be partially tied to the most common criticism of literary utopias: that they are mere static blueprints, inflexible and illusory. Moreover, I will contrast this paradoxical individualism with the collective-based focus of later feminist utopian novels from the 1960s, ‘70s and ‘80s, such as Marge Piercy’s Woman on the Edge of Time, Joanna Russ’s The Female Man and Sally Miller Gearhart’s The Wanderground – all of which, I will argue, present self-organising systems whose egalitarianism makes collective evolution not only possible, but highly sustainable. Finally, I will examine what these findings mean for the overall purpose of the literary utopia, as well as for its role in our current political climate.

Late Summer Lectures concludes on 4th October, with a talk on British poetry of the coast. Join the conversation on Twitter via #LateSummerLectures.