Loneliness is a social epidemic, but one for which there is no easy cure. Cheryl Julia Lee went to hear George Monbiot and Ewan McLennan at their gig at Durham Book Festival, which sought to use music to bring people that bit closer together. 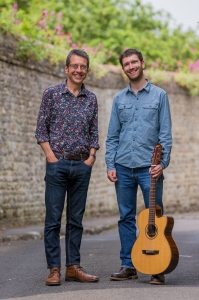 Seven billion lonely worlds a’wandering,
Eyes fixed fast to the ground.
Seven billion lives alone together
in the double glazed rows of the town.
– “Reclaim the Street,” from Breaking the Spell of Loneliness

These days, loneliness seems to be on everyone’s mind. There are articles filled with unsettling statistics that mention sufferers in the hundreds and thousands, and that use words like “severe” and “blights” so we know they mean business. There are opinion pieces entitled “Ways to End Loneliness.” There is even a formal campaign to address the problem. These are all of course important parts of the conversation but they also seem to be somehow missing the mark. If anything, the suggestions that one might “take up a new activity” or “talk to someone about how you’re feeling” can intensify one’s feelings of alienation. Because loneliness isn’t a problem that can be easily sighted and then tackled via steps and procedures; it is not a leaking tap or a busted lightbulb. Loneliness has no fixed form.

This is a truth that George Monbiot and Ewan McLennan – who might be styled “curators of solitude” after a line from their album – grasp. This is what makes their musical collaboration, Breaking the Spell of Loneliness, as close as anything we have to a ‘cure’ for the epidemic. The project has its roots in an article Monbiot wrote for The Guardian, which quickly went viral. Although the article clearly touched a nerve with the public, Monbiot seems to sense that there is a place which his words and statistics cannot reach on their own, hence his turn to McLennan and his music. The resulting album, and the evening along with it, is magical. McLennan’s voice seems to hail from a different time and space. Even as it seeks to break the spell of loneliness, it casts its own spell on the audience.

Monbiot and McLennan are Pied Pipers. They have made children out of us again and we are caught up in the music. We nod, sway, tap our feet. (Some of us even follow them to the pub after.) There is something about music that captures the imagination, especially a lonely one. A remnant, perhaps, of angst-filled teenage years spent believing that the members of our favourite bands are the only ones in the world who understand us perfectly. But how many of us are without these tried-and-tested first lines of defense against loneliness? Music has the ability to speak simultaneously to the individual and to the masses. It is my song as much as it is yours.

Monbiot and McLennan aren’t peddlers of easy, and hence false, wisdom. They don’t suggest that loneliness is an easy problem to solve – but they do say that it is human nature to try and overcome it. We are, after all, the most social of all mammals (apart from naked mole-rats, says Monbiot). In presenting us with Breaking the Spell of Loneliness, Monbiot and McLennan are reaching out to us by means which are instinctive and primal, in order that they may draw out something else instinctive and primal within us: the capacity for empathy. The “time-honoured lie” is that we are naturally predisposed to compete with each other, but as McLennan sings on the track, “Such a Thing as Society,” that is “not who we are, it’s not how we live.” Empathy is as natural to us as our response to music. We need only to nurture it and it is our moral obligation to do so. Without empathy, well-meaning initiatives cannot be sustained; with it, we won’t need these initiatives.

Joining McLennan in a rousing rendition of “We Shall Overcome” at the end of the evening, we are each of us a voice with a base note of loneliness, resonating alongside others. Monbiot, the imposing writer of viral articles, is made human by the fumbling of notecards with song lyrics written onto them. McLennan, the musician with talents some of us can only dream of, is a modern day Orpheus in a button-down. And then there is the audience: the student, the professor, the parent, the grandparent, the son of miners, the daughter of bankers. Did the music fix us? Probably not. Those of us who began the day lonely will most likely end it lonely as well. But for the space of an hour and a half, a hand was extended to us in compassion, prompting us to extend our own hands in return. The old refrain of No one understands is momentarily drowned out by the sounds of somebody trying to. If the concert and album end with seemingly naive optimism, so what? It has always been art’s prerogative to make grand claims. And if Monbiot and McLennan’s music can move us to action, all the better still.

2 thoughts on “Curators of Solitude: Review of George Monbiot and Ewan McLennan – Breaking the Spell of Loneliness”