How does music express themes of loss, love, and mortality? How do musical instruments articulate their own poetry? Curtis Runstedler has a conversation with Mark Burgess, the vocalist of the cult classic post-punk band The Chameleons, on the literary aspects of post-punk music. Mark discusses his literary interests and his insights on performance, reality, memories, and dreams. He further considers the evolution of his music and explains the intentions behind the recurring rhetorical questions in both lyric and song.

Thinking about the relationship between post-punk music and literature, are there any particular novels or short stories that influenced the music of The Chameleons?

No, not really. I mean, I always was an avid reader and sometimes I would slip things in when ad-libbing at shows, but with regards to the actual writing of the songs, they reflect a view of a very real, surrounding reality, or at least perspectives on reality. There was one obvious literary theme that I used and it was in one of the very first songs we ever wrote, which was called ‘The Fan And The Bellows’ (the title itself comes from the line in William Shakespeare’s Antony and Cleopatra: ‘He has become the bellows and the fan to cool a gypsy’s lust’). The song runs with that theme.

Mark E. Smith of The Fall has stated that his literary influences include H.P. Lovecraft and Thomas Hardy, while other post-punk musicians such as Nick Cave draw heavily upon Scriptural sources for their music. As a fellow post-punk musician, do you share their thematic ideas and literary references? Or is each band different?

I think each writer is unique in the way that influences are filtered and utilised and quite often influences can creep in and you just don’t realise it until someone else points it out. Sometimes it can be coincidence if you believe in it, and other times they just see things there that you didn’t intend.

No, I don’t share them, really. I really like the stories of H.P. Lovecraft, but as far as I’m aware, they’ve never influenced me at all. I think each writer is unique in the way that influences are filtered and utilised and quite often influences can creep in and you just don’t realise it until someone else points it out. Sometimes it can be coincidence if you believe in it, and other times they just see things there that you didn’t intend – that’s not to say it ’s wrong or anything, they spotted it and you didn’t. Lyrics especially can say different things to different people, and I for one hate fucking with that to be honest. I think that’s a good thing.

The Chameleons’ debut album Script of the Bridge (1983) seems to form a narrative of emotions, with the poetic lyrics reflecting universal themes of loss, love, dreams, and more. How does music help to express these themes?

Well, we’d be jamming music together and stumble upon something, and then I would create a song, an arrangement around it. Whatever we were playing in terms of atmosphere of ‘feel’ would help determine the theme along with whatever happened to be bounding around my head at the time.

The theme of memory really plays into your music and writing (I was thinking of ‘Childhood’ from the Chameleons’ classic third album Strange Times, which was released in 1986, as well as your incredible remembrance of the past in your autobiography View from a Hill). What are your thoughts on this?

It’s impressions that have more bearing for me, that is born of experiences, rather that actual memory.

Yes, as subjective as memory is it’s important, especially when important things are eroding, like diversity, freedom, and individuality. I grew up in the ’60s and by the time we got to the ’80s, it may as well have been a different planet. To be honest, though, it’s impressions that have more bearing for me, that is born of experiences, rather that actual memory. The book was a different thing, memory and diaries helped there.

The Chameleons is particularly distinctive for its the interplay between the poetic lyrics and the guitars (like on ‘View from a Hill’ for example). Would you agree?

I totally agree, but that was how the music was created. Quite often, I wouldn’t physically write anything, I’d play off the music we were playing and whatever themes were in my head and jam out the whole song, which would evolve all the way to the studio or radio session or whatever. By the time we actually recorded it most of the song’s lyrics were there, they just needed tweaking. I’d do that both in rehearsals and at live shows. In between I’d go over them in my head until they feel ‘right’ then deem it finished, although they never are, the lyrics are still evolving even today.

Listening to your ’80s records and then listening to the more recent Why Call it Anything? (2001), how have your lyrics, sound and themes evolved over time? 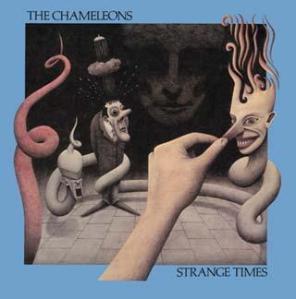 Oh, they’re rampant. What kind of times are these? Is it any wonder?  Is this all that you are? That’s part of our job, to pose those kinds of rhetorical questions, questions that we should be asking ourselves.

3 thoughts on “It’s Just a Trick of the Light: Mark Burgess of The Chameleons on Literature and Music”